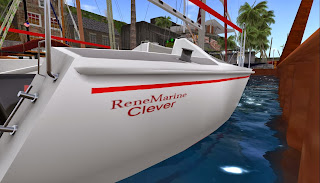 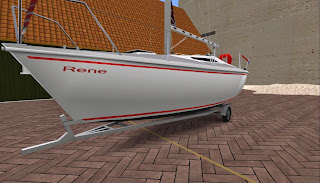 Rene Underby is so proud to own in RL a Clever 23 which is also known as a Sportina 680. This is a fiberglass hull 23 foot Sailboat that she docks in the Netherlands. She loves it so much that she recreated it here Second Life for you to sail.

This is a Mesh boat and requires a Mesh Compatible viewer.

And then there's the standard ReneMarine set of features
* AutoTrim
* Tako based controls
* switchable Active Camera (obsolete command)
* Race Mode
* Sails can be made semitransparent with the alpha controls
* Command Line assignable skipper
* Seats four. Skipper and a three passengers

Hiking
The Pilot for The Clever is the first person to sit on the boat. The pilot can switch to certain seats on command without using the menus. The Clever responds to the crew positions on the boat. Speed is affected when the boat is level. The boat slows when it is trying to resist the turning forces brought when the boat heels too much. Each of the four sitters can move to any side on the boat independently. 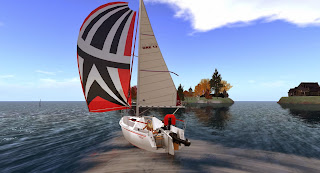 [ 2c2    Rudder
-----------------------
The Rudder Position indicator tells you the actual position of the rudder under the boat.
NOTE: Press Both Arrow keys at the same time to center the rudder.
Note: Shift Right and Shift Left will move the rudder to the farthest position of either side.
If you have no forward motion, then you have limited rudder control. You must raise the sails and gain forward momentum and then the rudder will turn the boat. Just like a real sailboat, the sails must catch the wind in order to move. If you lose the wind, then your boat will slow down and stop. The boat will drift backwards when the wind is at your face and you will have to use the rudder to turn the ship so that you catch the wind again.
Key controls
Press the arrow button opposite the direction the rudder is turned and the rudder will return to the center.

It takes a moment to lower the outboard motor and pull start it. So you can expect a few seconds delay between when you lower the motor and when you actually can increase the throttle. You'll hear the sounds of the motor dropping and the pull starter.

===================================
3)  List of Chat Commands and keyboard controls
===================================
The commands can be entered into Local Chat.
(Note: commands are case sensitive do not include the asterisk -  *)
* raise - Raises the sails (gesture r)
* lower - Lowers the sails (gesture l)
* moor - Lowers the sails and parks the boat (gesture F5)
* autotrim / Toggles Automatic Sail Adjustment when in Cruise Mode (Disabled in Race Mode) (gesture a)
* motor - Outboard Motor Power (gesture F4)
* channel xxx  (NEW COMMAND) sets the channel that your commands will use
* c - Sets Camera Angle (obsolete command)
* notecard - sends user this notecard
* hud - sends user the sailing HUD
* Up/Down arrows when motoring increase/decrease the throttle.
when sailing it increase/decrease the sheet angle.
(hold down the pageup button or the e button to
increase the rate of change of the sail angle)
* Left/Right arrows control the Rudder to port and starboard.
* Press Both Left and Right arrows at the same time to center the Rudder
* Press arrow opposite the direction you're turning to center the Rudder
* idxxxx / sets Race id.
* id off / turns off Race Mode and activates Cruising Mode.
* set dock - stores the current position of the boat on the boat
* dock - moves the boat to the position set on the boat with set dock.
Must be within 10M of that position.
* skipper Firstname Lastname - sets an alternate skipper who can take helm control of the
boat.  Only one alternate skipper is allowed at a time.
* camera - toggles between Active and Inactive Camera (obsolete command)
* alpha - sets the transparency of the Mainsail and the genoa.
* spinalpha - sets the transparency of the spinnaker
alpha 100 is Solid
alpha 80 is a good setting
alpha 0 is completely transparent
* wind dir nnn Sets the direction of the wind in degrees from North. So by example wind dir
wind dir 0 - north
wind dir 90 - east
wind dir 180 - south
wind dir 270 - west
* wind spd 00 - Sets the wind speed in knots. So for example wind spd 17 sets the wind speed
to 17 knots.
* wind - Resets the wind to automatic mode so that it resumes automatically accepting WWC
from the local wind setters.
* individual sail commands
raise ms - raises mainsail
raise genoa - raises genoa
lower ms - lowers the mainsail
lower genoa  - lowers the genoa
* Reefing Commands
The sails can be reefed to reduce the sail area exposed to the wind.
rg0 through rg100 - rg is reef genoa then add a number from zero to one hundred
rm0 through rm100 - rm is to reef main, then add a number from zero to one hundred
spi - Deploy and retrieve the spinnaker
* Load Distribution
The Clever is a balance detecting boat. So it will detect where your av is sitting and balance to that side of the boat. We have provided four Gestures that will move the pilot to different locations. Outside Left, Right and Center Left Right. Changing your sitting position will cause the boat to heel in that direction.
* shl - sits High on the Left side (Gesture 1)
* sll - sits Low on the Left side (Gesture 2)
* slr - sits Low on the Right Side (Gesture 3)
* shr - sits High on the Right side (Gesture 4)


==================
8)      Texturing
==================
Hull Texturing -  The boat comes copy/mod so you can color your boat as you please.
Sail Texturing - The sails are copy/mod. So you can texture them to your taste. Sail textures are also applied by the script. The script relies on the name of the texture file to be correct and it is case sensitive. The script will take care of applying the texture at the right time and to the right faces. So when you replace the sail texture files they have to be named as follows:
* clever-mainsailtexture in the Mainsail Prim (mainsail)
* clever-furl-texture goes into the Genoa Prim (outerjib)
* clever-jib-texture goes into the Genoa Prim (outerjib)
Spinnaker Texturing - the spinnaker (prim name spinnaker) features a texture switching script. So drop your spinnaker texture into the spinnaker prim inventory. In this case the name of the file doesnt matter much. The script will put the texture on the right faces. If you cant locate your spinnaker prim, deploy it and edit linked.
====================
9)     Points of Sail
=====================
The RM HUD 2 is the tool that you use to determine the velocity of the wind. The wind indicators point into the wind. When you are relying on the wind for propulsion you have to keep the wind to one of your sides. It cannot be coming directly into your face because then you will lose the wind. The wind cannot be coming from directly behind you because then you are not able to make use of the shape of the sail to optimize your speed. The RM HUD 2 has regions marked Red to the Port and Green to the Starboard within which the RM20 engine will operate efficiently. You have to think ahead of your turns now because the arrow keys are not turning the boat. The arrow keys are turning the rudder and the hydrodynamic action of the rudder is turning the boat. How to sail your boat is a matter of a long lesson in sailing terminologies and wind angles. Much has already been written on this subject which we need not repeat here. You can read about how to Sail your Clever here on this web page.
http://en.wikipedia.org/wiki/Sailing

==================
10)    Sim Boarders
==================
A note about SIM Borders. Most Sailing simulator regions cover multiple SIMs. The SIM crossings are difficult at best and occasionally disasterous. SIM Crossings can be more difficult the more prims and scripts you're pushing to the new area. The number of passengers on your boat increases the difficulties of SIM Border crossings exponentially. When crossing any sim border the results are typically unpredictable. That being said, it is best to make use of your MiniMap to identify the upcoming SIM crossings. If you're going to cross a SIM border it's best to hit that border head on perpendicular and not at an angle. That way you dont confuse the next sim during the handoff. It's best not to be turning while crossing a sim border because the handoff will send you spinning. Other things to account for are attachments that are heavily scripted. Collars especially are troublesome. It is helpful to remove your scripted attachments when running your boat across the sim borders. All these are helpful suggestions, but sometimes the handoffs will still be difficult.
====================================
11)   ReneMarine's Customer Support
====================================
ReneMarine Yacht Building is happy to provide customers with Support. If you have any questions please send a message to Rene Underby who will be happy to help. Second Life servers are subject to frequent upgrades and SL Sailing can be a challenge in the best of circumstances.  When a bug is found in a product and fixed, ReneMarine will offer a free upgrade. No warranties or guarantees accompany your purchases. No Refunds.